Small but mighty: Eat, drink and be merry in Taranaki

Finding himself suddenly back in New Zealand because of Covid-19, Kiwi chef Carl Maunder – who had been living in Dubai for more than three years, working as executive chef at Sean Connolly’s Dubai Opera restaurant and then later Vida The Hills – was presented with an opportunity. Approached by an old colleague who was looking for a partner to help enliven the restaurant scene in central New Plymouth, Carl came on board with his concept for State Pasta. 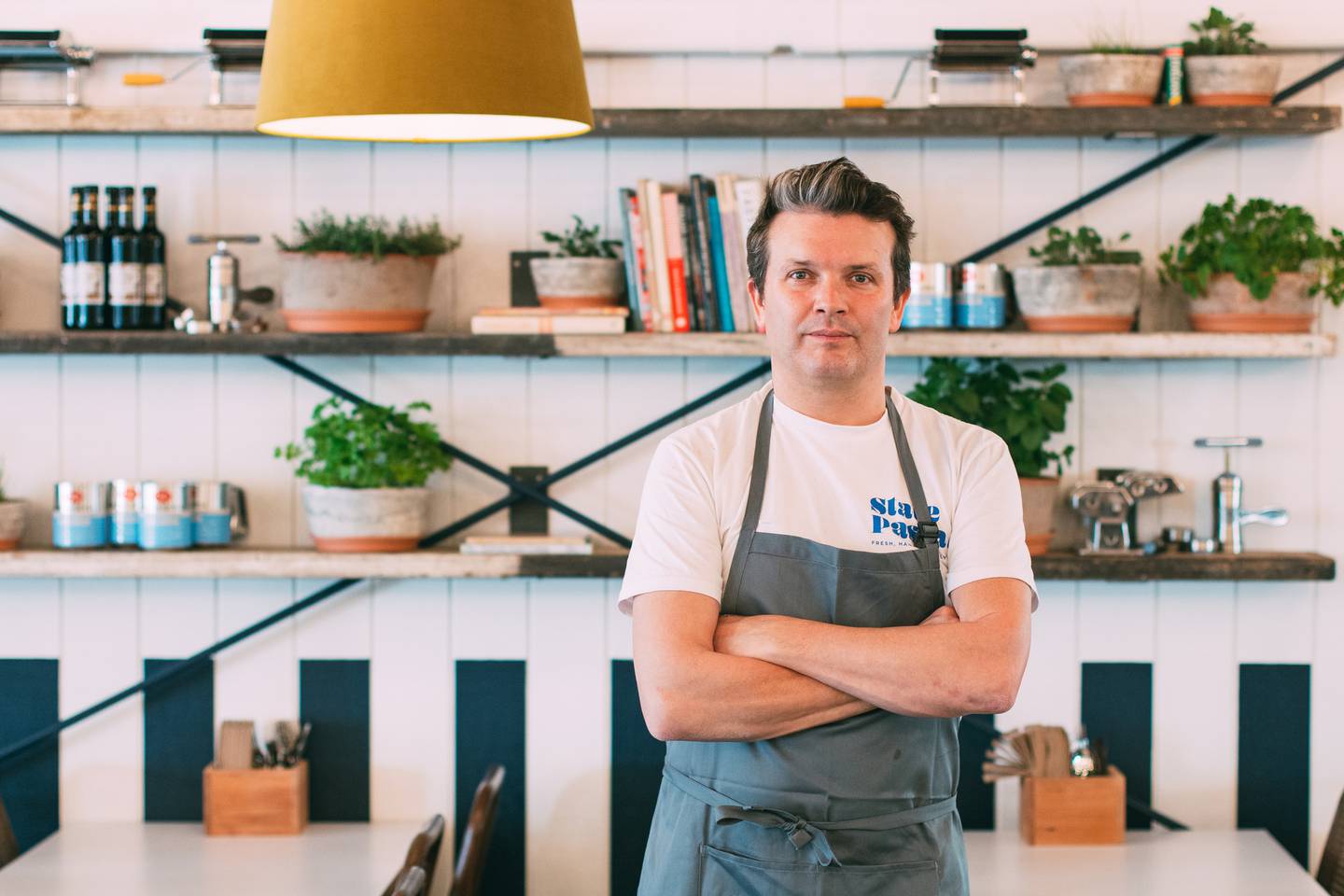 Maunder’s menu is full of the kind of dishes he would cook for guests at home and he describes the concept simply as “fresh, handmade pasta”‘. I was here for lunch, at the beginning of a delicious weekend in the Taranaki city, and I’d arrived at my table not long after disembarking from my short flight from Auckland. Plate after plate of vibrant vegetables and decadent pasta arrived in front of me. Delicate chicken ravioli, a simple orecchiette tossed with broccoli and a penne carbonara that I kept coming back to, impressed no end and filled me to the brim. I sadly had to decline dessert, even though the gelato counter near the entryway looked picture perfect. I needed to pace myself as I had a big gourmet weekend ahead of me. 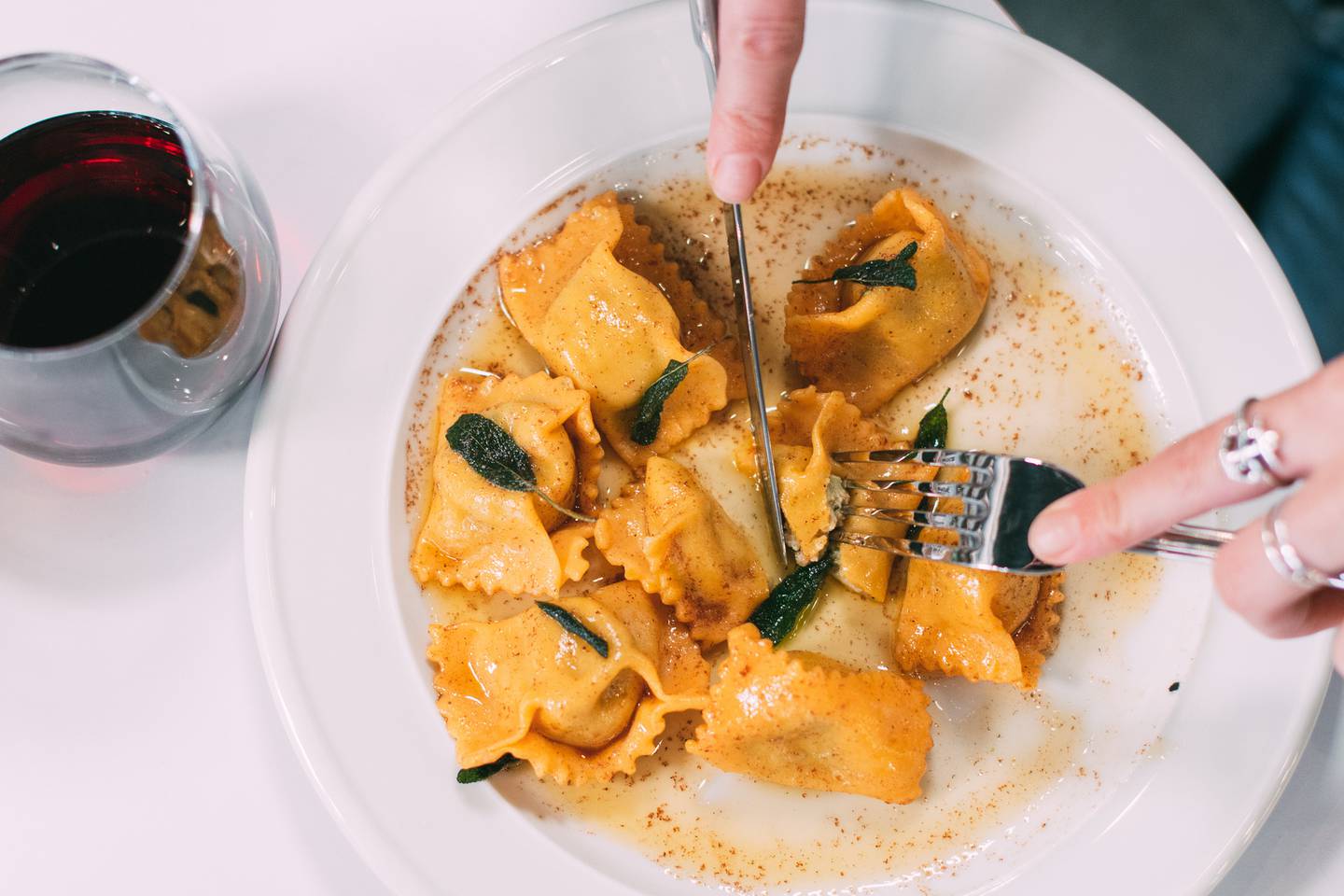 Across town, in a shed masquerading as an office, or perhaps an office masquerading as a shed, you’ll find gin gurus Dave and Jo James. Back in 2015, while living in Australia, the couple tossed in their regular day jobs in the health sector (Jo) and farm sustainability (Dave), returned to New Zealand and embarked on a long and complex journey towards

. Working with Taranaki engineering firm, Rivet, the couple designed a copper still that would minimise waste as much as possible. The still, named Leila, is at the heart of every Juno batch. In keeping with their ethos of sustainability, Jo and Dave endeavour to source their botanicals as locally as possible. Their orris root comes from Hawke’s Bay and they recently teamed up with researchers at Massey University to seek juniperus communis plants in New Zealand so that commercial juniper crops can be established in the future. 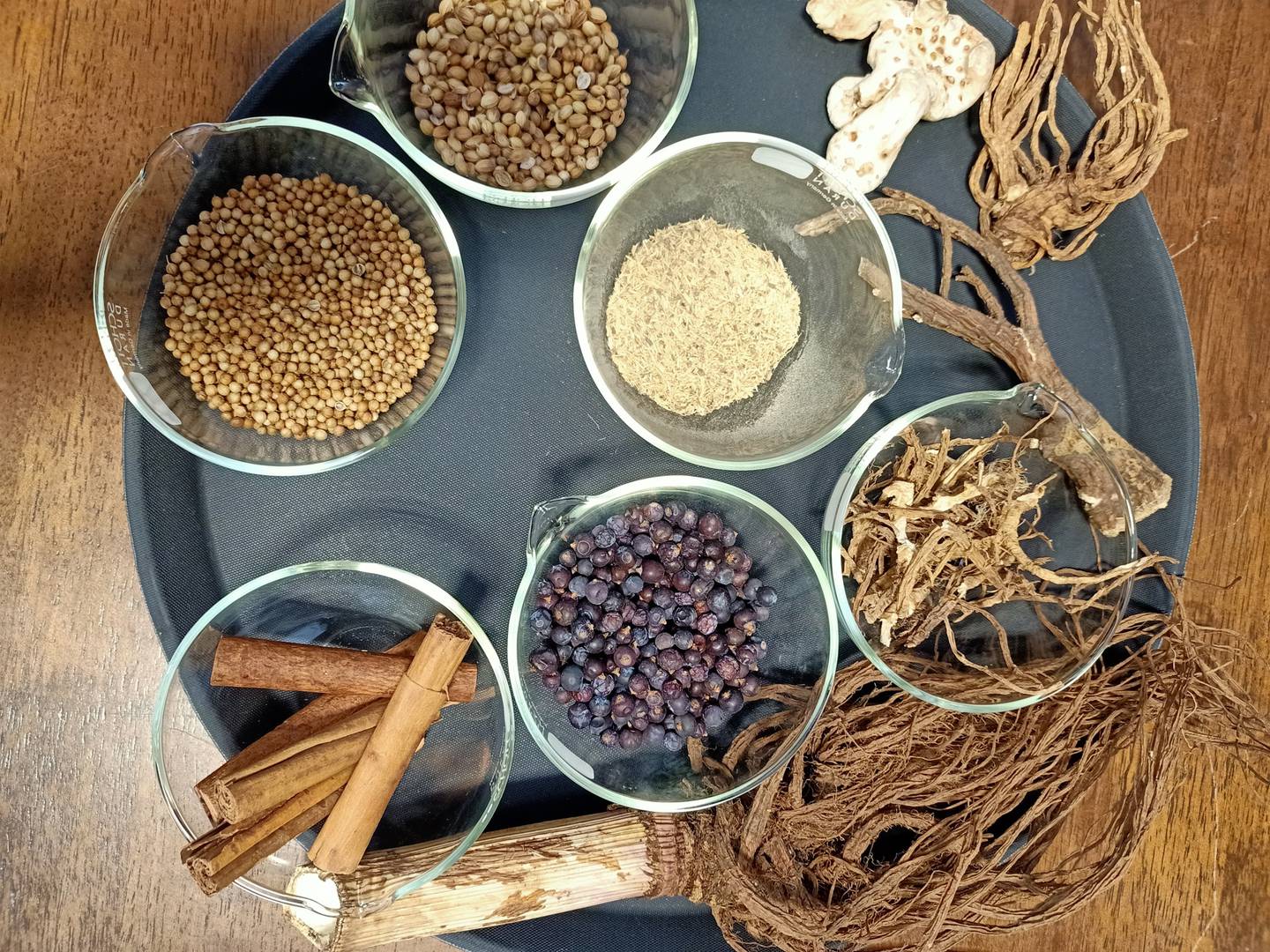 At a table adorned with some gnarly dried plants, herbs and spices, they talked me through the various flavours that are at the heart of their gin. The passion and ingenuity this husband and wife team bring to every batch they create is impressive. Working closely with producers in the community they have infused everything from locally grown yuzu and Rangpur limes, to foraged wild cranberries and horopito, into their limited-edition gins. They’re now planning to expand their base, adding a welcoming tasting room for gin-trepid travellers. 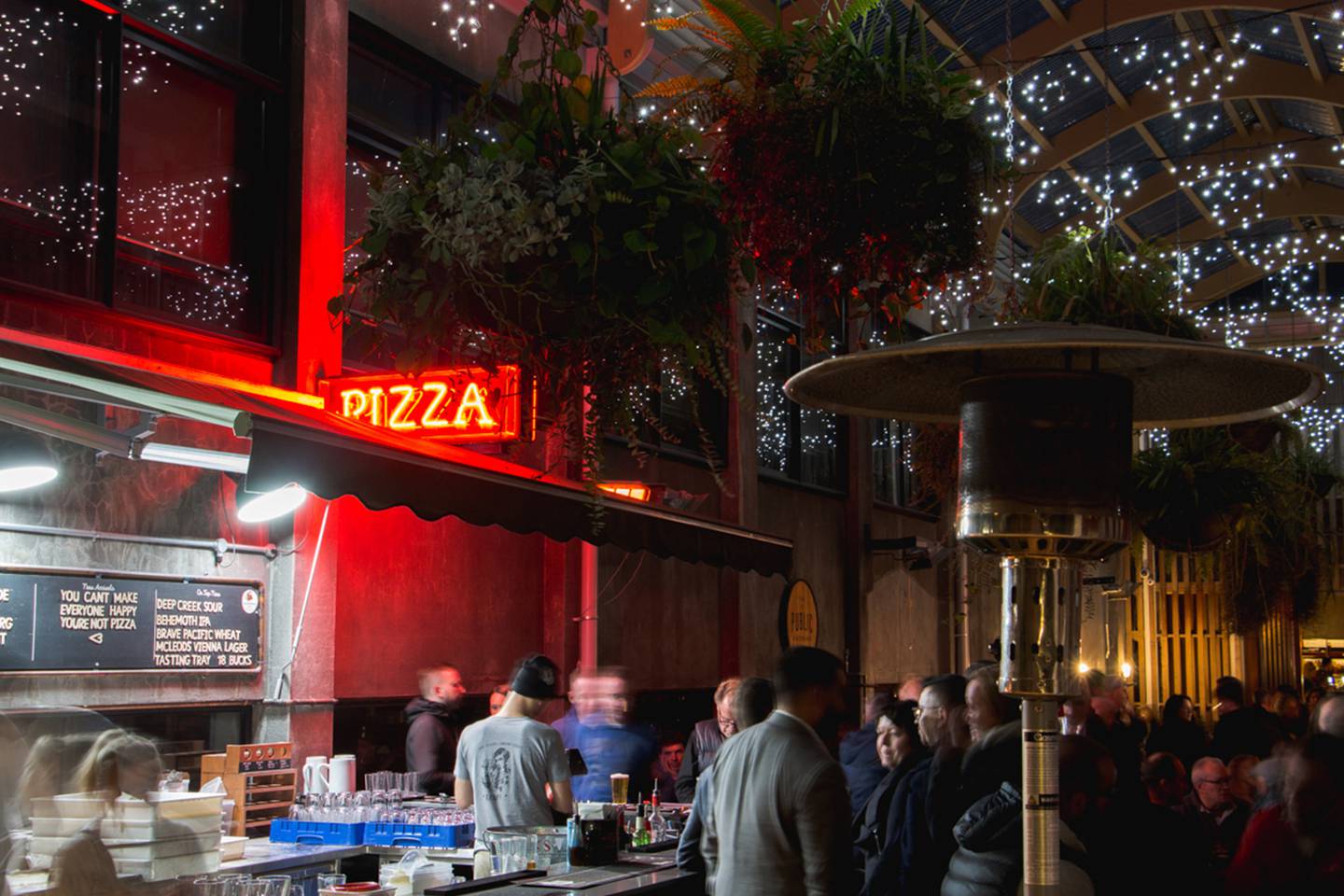 , a bar only about 10 steps from the door of my hotel, perfect for a pre-dinner drink. Situated in a covered arcade adorned with fairy lights, it’s a cosy stop. Two simple menus grace the bar, one for drinks – largely dominated by New Zealand craft beers – and the other for woodfired pizzas. “What can I get you?” a friendly voice enquired as I studied the drinks menu. A passionate discussion about sour beers followed before my bartender, Jack, steered me to an apricot sour by 8wired – it was delightful. Several times during the day I had mentioned to locals that I would be dining at Social Kitchen and the reaction was always the same – you’ll love it. I couldn’t remember the last time I had gone for dinner alone and at first I felt a little uncomfortable. Everything on the well-crafted menu sounded so good I ended up panic ordering and regretting it a little, the lamb main I had was lovely and so was the side of peas, but they both boasted strong flavours that didn’t necessarily work well together. 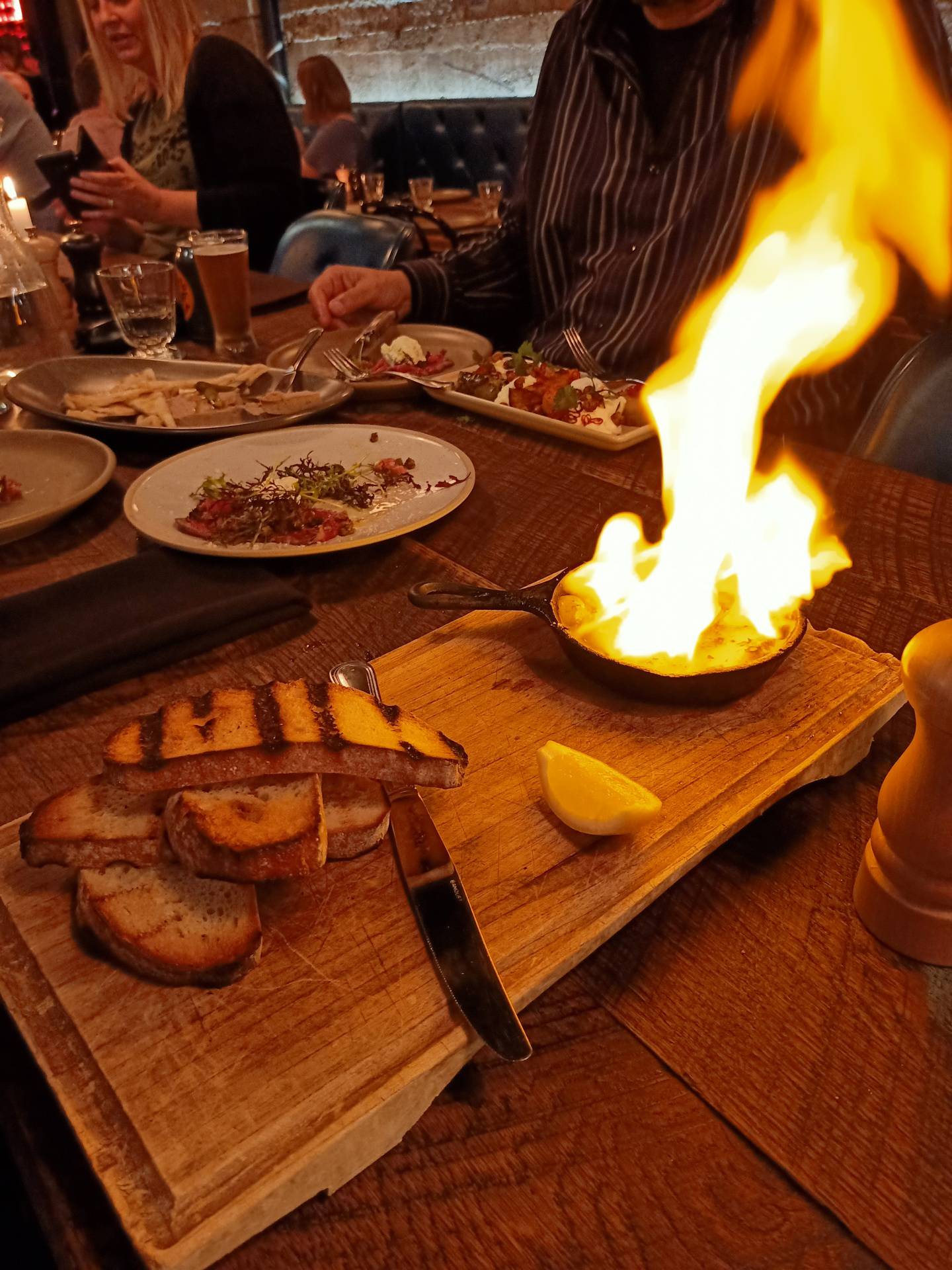 The two men sitting closest to me at the large shared table had done a much better job of ordering than I had, selecting many small plates to share. When my neighbour’s ouzo halloumi came out in a flaming flourish I leant over and snapped a photo. My intrusion on their meal broke the ice and before I knew it, I was being invited to try everything they had ordered, from pate to mushrooms and even the flaming halloumi. My new foodie pals showed me just what this restaurant was all about, sharing plates with friends.

The next morning, after a strong coffee and a good serve of smashed avocado from sunny corner cafe, Monica’s, I was ready to explore what is arguably New Plymouth’s biggest attraction, The Govett-Brewster Art Gallery. Founded in 1970 from money left by the indomitable Monica Govett-Brewster the gallery is dedicated to modern art. The late New Zealand artist Len Lye was so impressed when they showed a collection of his work in 1977 he entrusted his archive of sketches, drawings and models to it.

In 2015 the gallery added to the original building with the architectural marvel that is the Len Lye Centre. The building is stunning, you could stare at it for hours. In fact, legend has it an American visitor once visited New Plymouth purely to photograph the Len Lye Centre from all angles and lights throughout the day.

The Gallery is home to much of Lye’s work, from his experimental video pieces to large scale installations such as Sky Snakes. a piece which is immense in both appearance and impact, inviting you to stand beneath the rotating metal rods as light bounces on and around you – simply mesmerising. 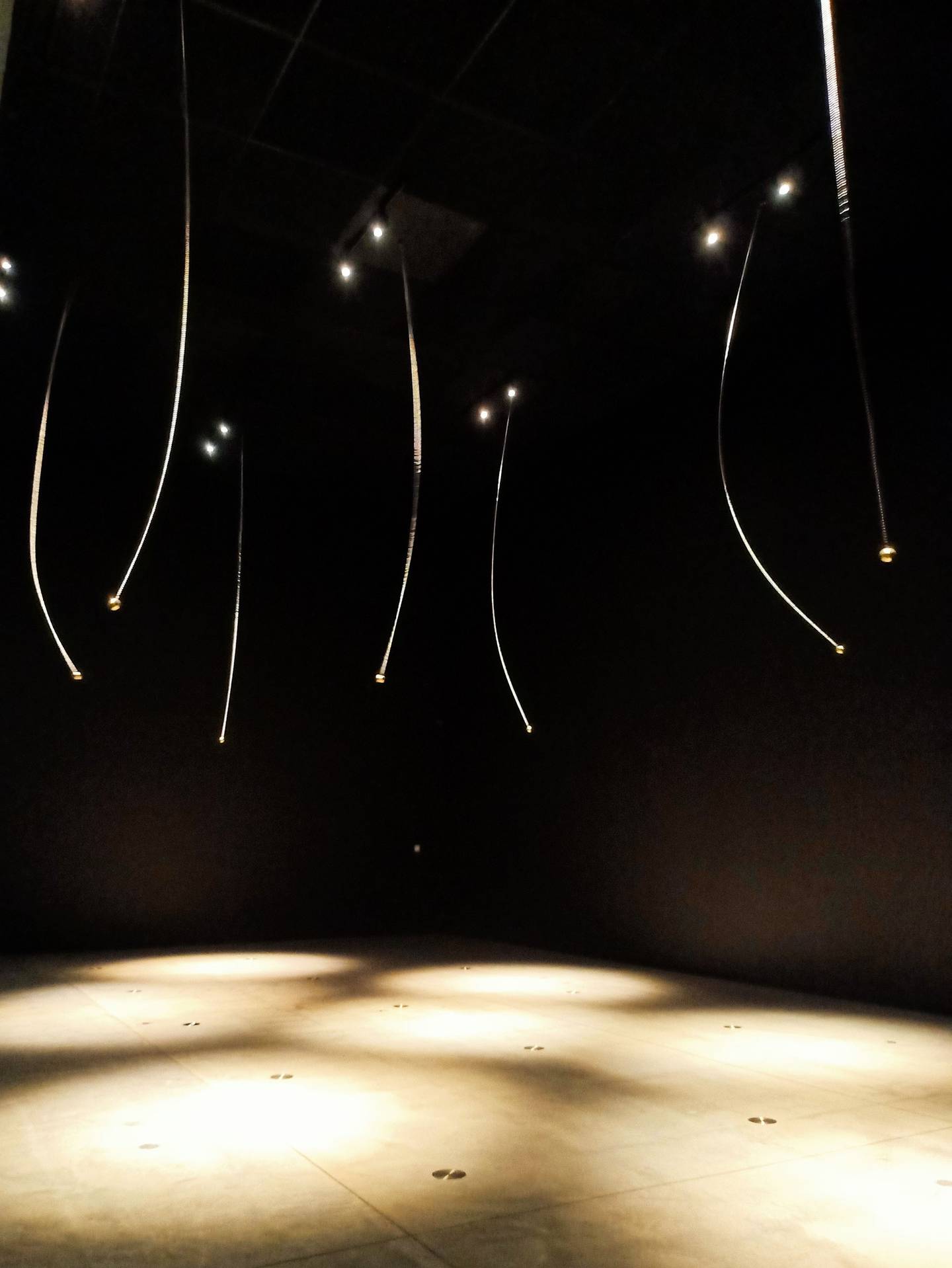 A morning of culture should always be followed by good coffee, so I made my way to Ozone for a “cupping” experience. Head roaster Paul Newbold set me up at a table with cups and small bowls filled with coffee beans, a small printed card denoting their origin and processing method. From beans to ground we sniffed each one, then water was added. Next, we had to break the surface with a spoon and have another sniff. Finally, we were sipping and my senses were met with everything from citrus notes to chocolate and nuts. Two of the most diverse flavours I tasted were actually sourced from the same region of Guatemala but processed differently, natural versus washed. As a self-diagnosed coffee addict I was stunned by how little I knew. 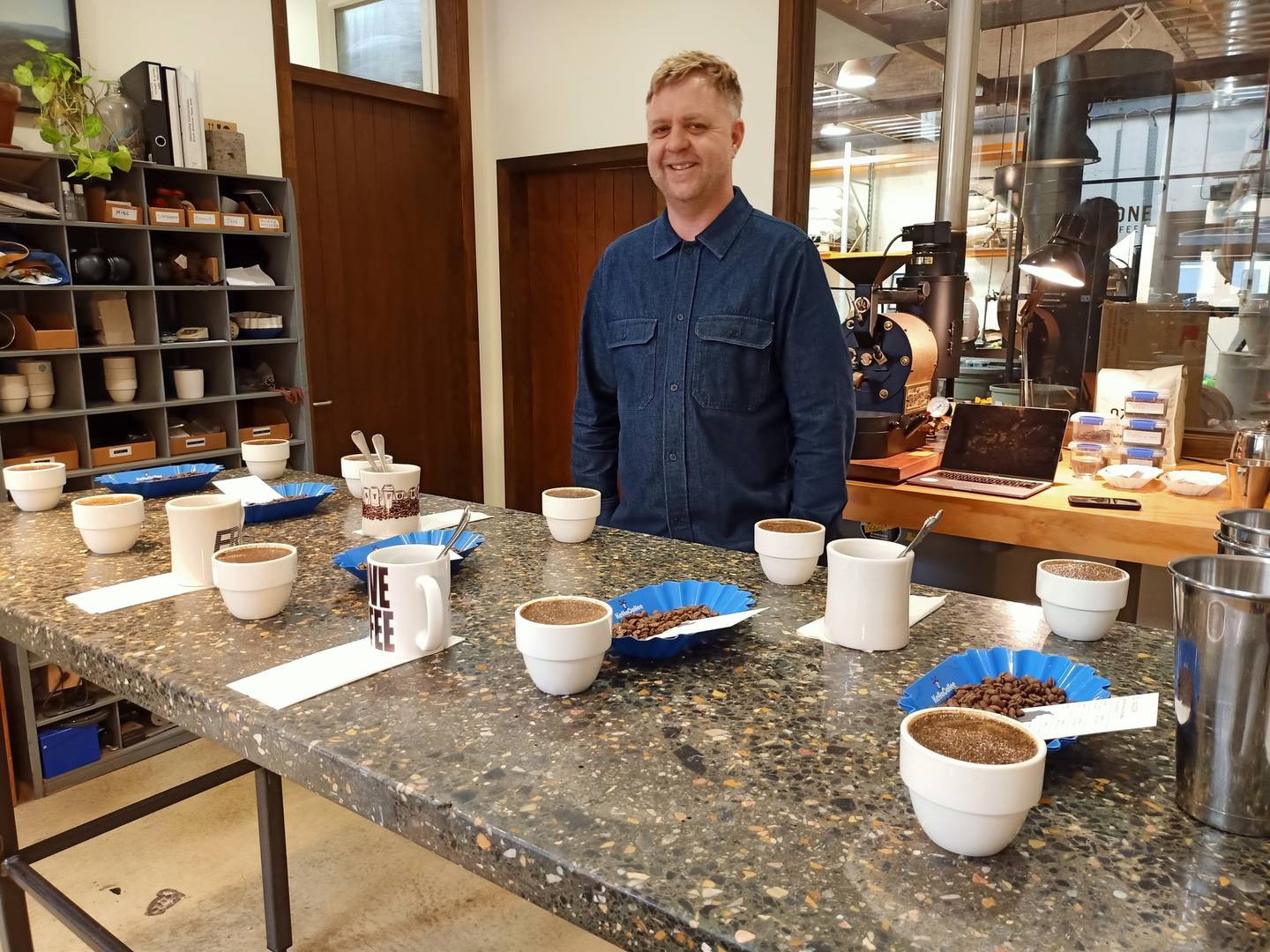 The weather in New Plymouth had finally started to improve and so I decided to avail myself of a bicycle, which I was delighted to learn were on hand and free to use for guests of my hotel, King and Queen Suites. With simple instructions to hit the coastal walkway and turn right I pedalled off. My path took me past the Len Lye Wind Wand, along rocky coast dotted with driftwood, across the strikingly white Te Rewa Rewa Bridge, into rolling farmland. Stopping often to take photos, it took me about an hour to cycle slowly to the end of the coastal walkway and back. The path is thankfully mostly flat with only one hill giving me any trouble. 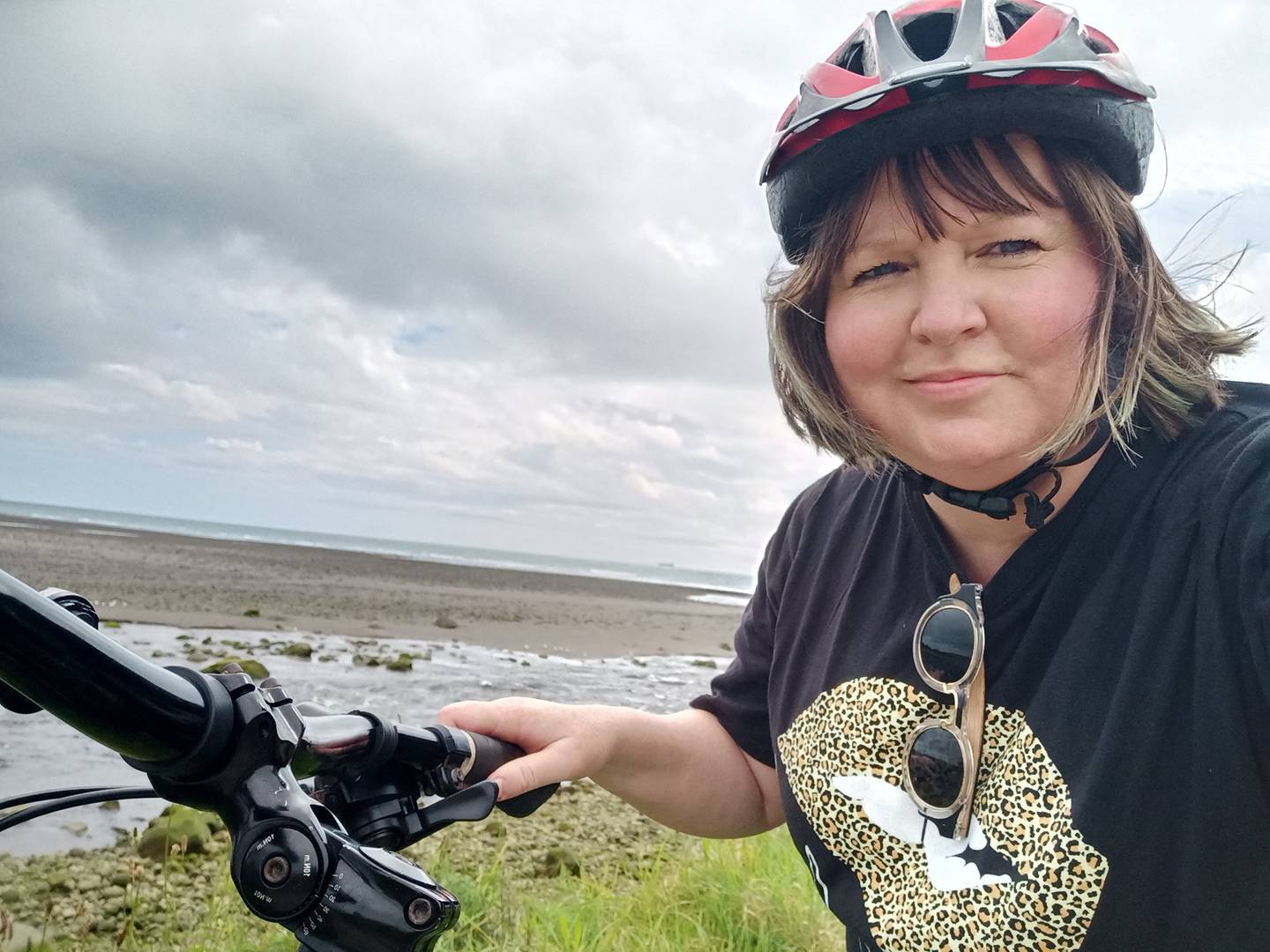 The last stop on my adventure was the absolute highlight – dinner at Meat & Liquor. The loveliest waiter I have ever encountered helped me choose the best options on the menu and even took the hassle out of choosing wine, instead bringing me offerings that would match well with my food. Head chef Rob Isbister’s menu is full of showstoppers such as smoked snapper mousse with squid-ink crackers, crunchy tempura Hapuka wings, smoked duck with a sweet maple glaze and, my favourite dish of the night, mushrooms sauteed with black garlic and truffle oil. If you get a chance to thank Rob at the end of your meal you will find him friendly and laid-back, in fact he might just let you in on some local knowledge – he gave me the hot tip that Itch Bar is the go-to place for a last drink. 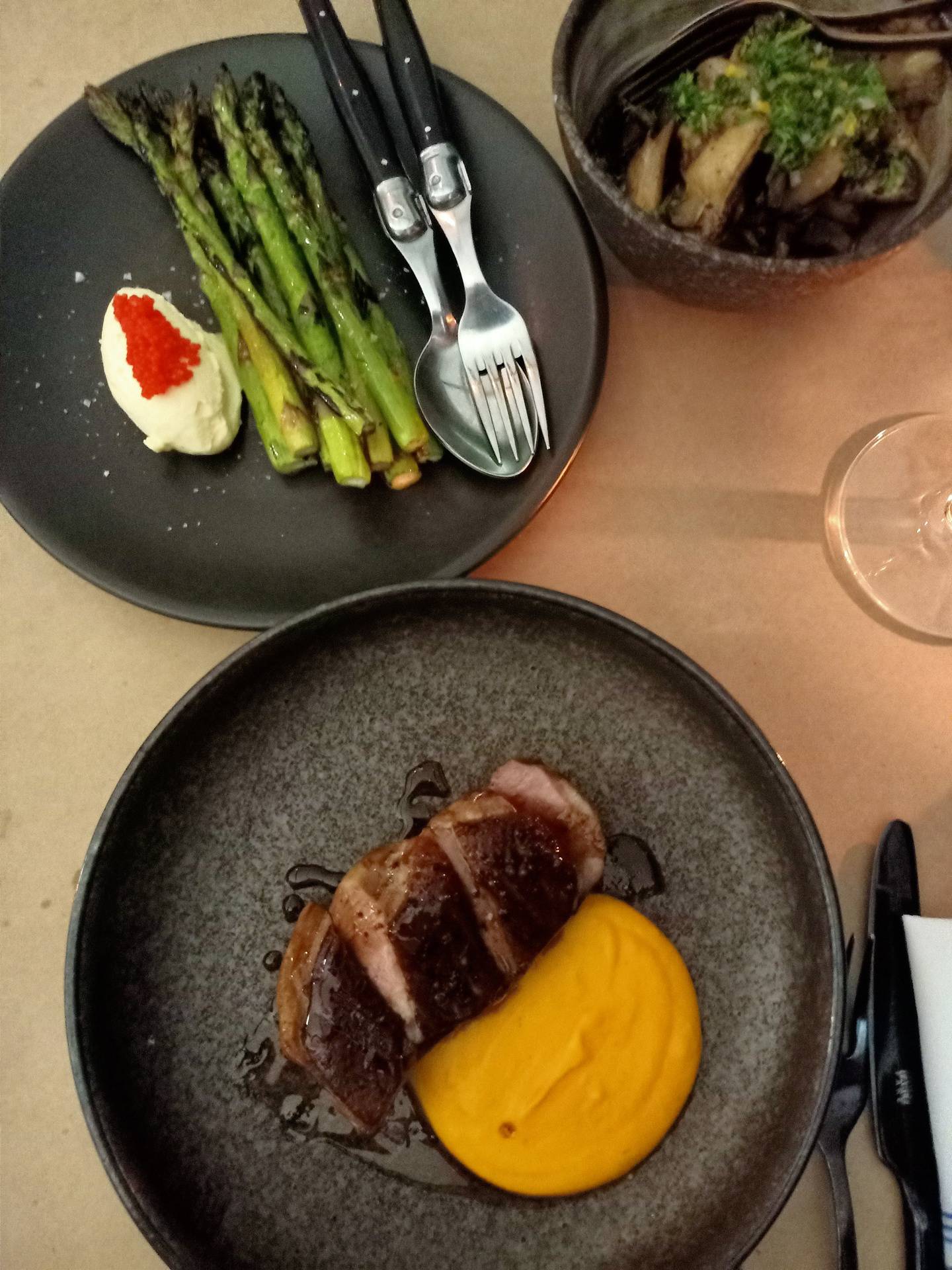 Heading into Itch alone I was soon enjoying lengthy chats with an aspiring artist, a craft beer brewer and talented chef Rob. New Plymouth is that kind of place – a friend is never far away. 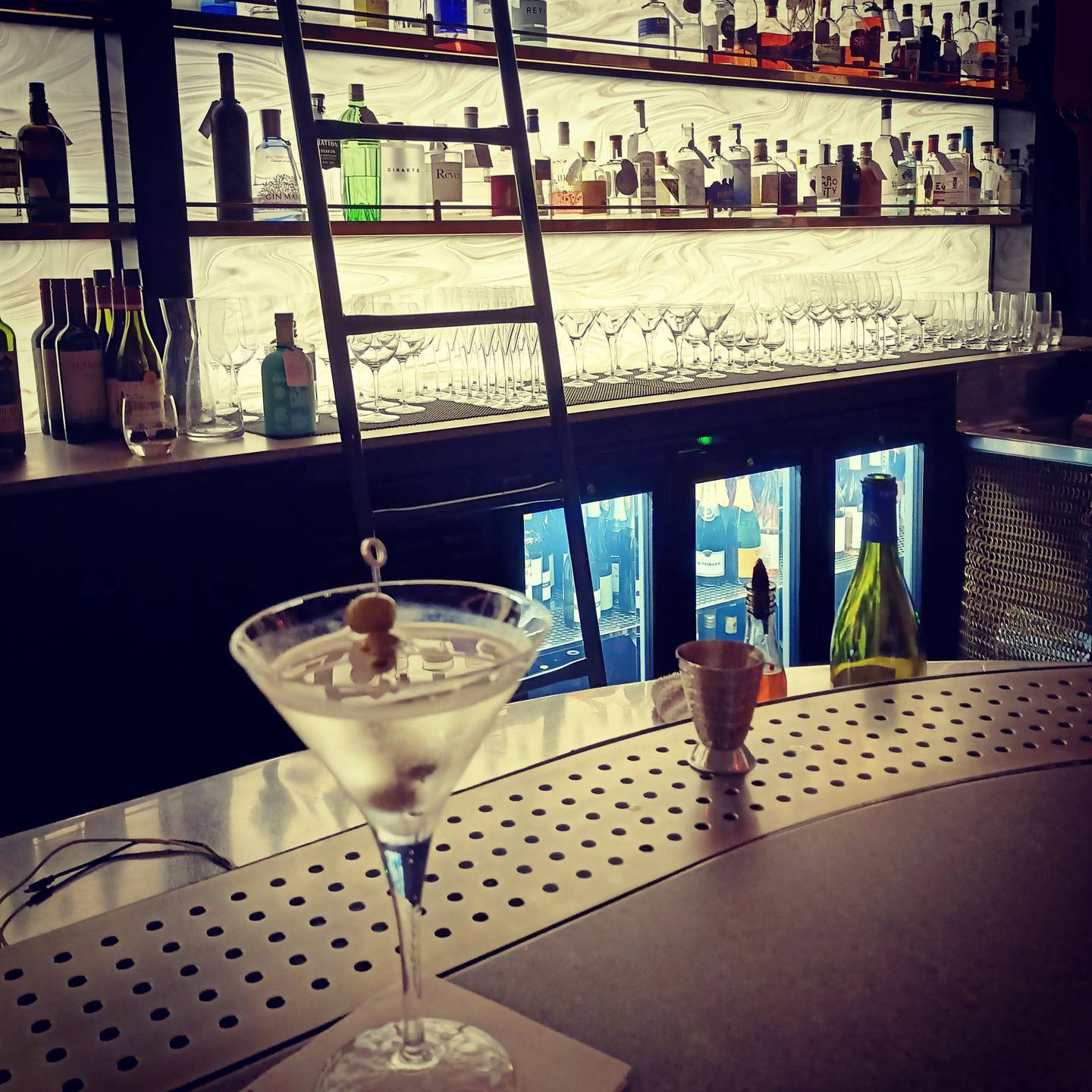