How to Conquer the City of Berlin: A Visitor’s Guide

But despite my intentions, I barely accomplished anything in five days. Berlin is just too big and spread out. My original purpose was to write a post on what to do in five days in Berlin. But after realizing how hard it was to get around and see the sights, that post was impossible to write. This city is just too overwhelming.

So instead, here are some ways you can avoid my sightseeing mistakes, maximize the time you have in Berlin, and make the most of your visit: 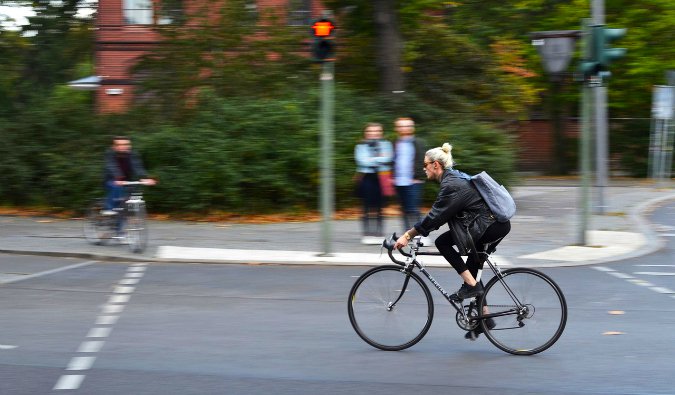 Rent a bike – Walking around Berlin takes (and wastes) a lot of time. However, the city is a great place for a bike ride. There are separate lanes for cyclists, so it’s easy to ride without the fear of getting hit by a car. Most residents bike around the city, and while I was a bit nervous when Uncornered Market first suggested it, by the end of the day I was really happy to be biking around Berlin. It provided a fast and easy way to get around, and bikes cost around nine euros per day to rent.

Take a bike tour – If you’d rather not cycle the city alone, try a bike tour. You’ll get all the benefits of exploring on bike that I just mentioned, plus the added bonus of having an expert local guide lead the way and tell you all about Berlin’s history, culture, and food. Some suggested companies are Fat Tire Tours, Berlin Bike Tours, and Berlin on Bike.

Do it in sections – I found out just how huge Berlin is when I tried walking between sights and subsequently spent the majority of my day just getting from Point A to Point B (which isn’t bad, but it wasn’t planned for). Break up the city into various areas, and then work from area to area. It will make conquering the city much easier.

Take a free walking tour – New Europe runs a long and informative walking tour that begins at the Brandenburg Gate and lasts 3.5 hours. It takes you through the center of the city, shows you all the highlights, gives you some history, and will help you orient yourself. Other great companies are The Original Free Berlin Tour and Free Tours by Foot.

Eat cheap – You can judge a city on how cheap it is by the food, and the food in Berlin is incredibly cheap. And not just street food (you can find currywurst everywhere!), kebabs, and quick pizzas, either — even the restaurants here are a bargain. You can find a lot of meals for less than five euros. I highly recommend eating at Mustafas. It’s known for the best kebabs in Berlin. The exaggerations are true — the lemon, the mint, the fresh vegetables! Mouth watering.

For another cheap eat, check out Thai Park (Preußen Park). During the summer, Thai locals will come to the park and cook up some delicious and cheap Thai food. It started as just a small Thai community gathering but it’s now a huge food market where you can get awesome eats for under €10. 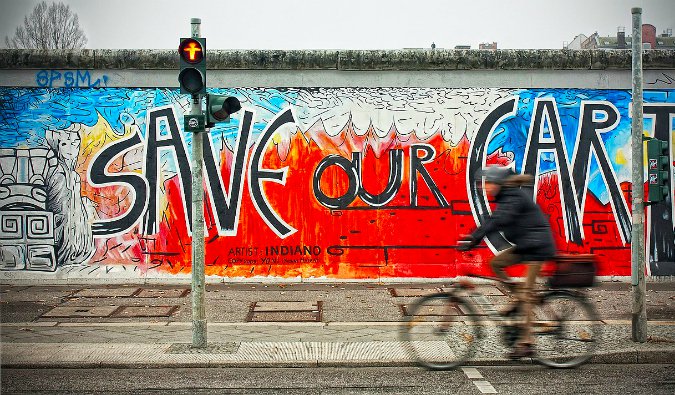 East Side Gallery
A giant section of the Berlin Wall was left standing, and artists were invited to paint a section of it that represented hope and violence. Now, the East Side Gallery is one of the best outdoor art exhibits in Berlin. I was really moved by some of the paintings.

Jewish History Museum
Jews have faced a long and hard road in Germany. They represented an important part of the population even though they were highly discriminated against. This museum traces the arrival of Jews and their contributions throughout German history, as well as the hardships they faced. It doesn’t go into much depth on the Holocaust, as there is a wonderful separate museum for that. But like all museums in Germany, this is huge and will require a few hours to properly explore. 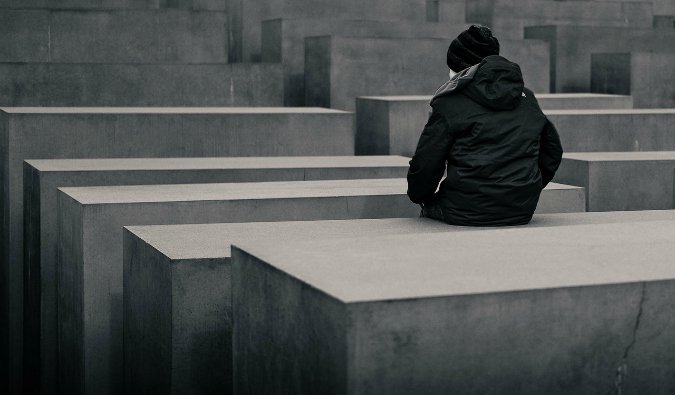 Located in Mitte near the Reichstag, the Holocaust Museum (officially called “The Memorial to the Murdered Jews of Europe”) chronicles the Nazis’ treatment and extermination of the Jews. The memorial is made up of concrete slabs designed to create a feeling of confusion and unease as you wander through them. Below is a museum that follows various families through the Holocaust. It creates a very personalized and moving way to learn about this awful blight on human history. 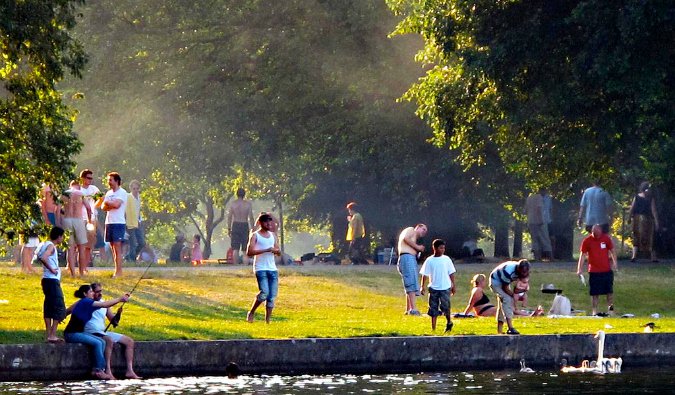 Located in the eastern part of Berlin, this park is near an old abandoned amusement park (which you can also visit). It’s a popular place to bike around, and there are a number of beer gardens and a small island nearby where they have a weekend flea market. Moreover, you can rent boats and canoes and cruise the adjoining river.

Templehof Park
Located in the southern part of the city, this park is actually the site of the old airport used during the Berlin Airlift after World War II, when the Soviets tried to blockade Berlin. Now, it’s a big park with a lot of plaques and information about the old airport. It’s not the best park in Berlin, but it’s cool to be able to walk around a piece of history.

German History Museum
Germany has a very long history, and this museum provides a detailed account of the country, starting from Roman times. It’s organized by time periods and has lots of artifacts. It’s giant, though, so if you visit, make sure you can plan to spend at least two hours here. Skip the audio guide, though; I didn’t find it to be that good.

DDR Museum
This museum focuses on life in East Berlin. It’s separated into the various aspects of daily life: food, clothing, schooling, fun, music, etc. It provides a good window into how the citizens of East Berlin (the Communist side) lived. One thing I found interesting was that to escape the conformity of life under the Communists, it was normal for people to go to nude beaches.

Hang out in Tiergarten 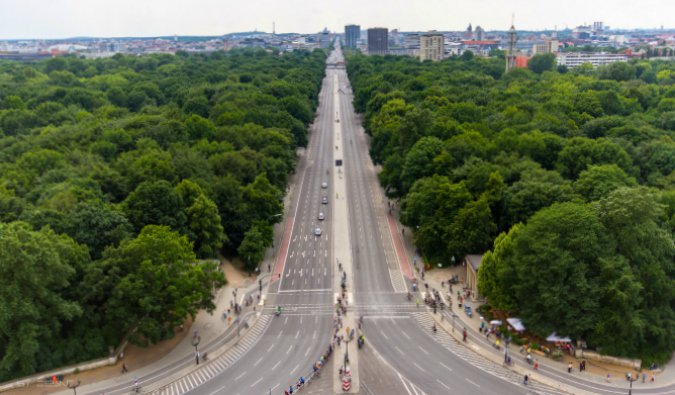 Berlin’s central park is an excellent place to relax, walk, bike, and hang out. It’s one of the most beautiful city parks in all of Europe, in my opinion. There’s a war memorial for Russian soldiers, and you can also see the nearby Reichstag (Germany’s parliament) and famous Brandenburg Gate. 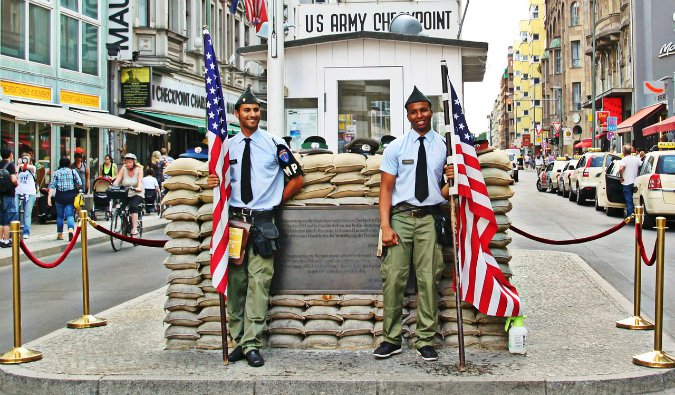 This is the infamous gateway between former East and West Berlin. There’s a reconstruction of the checkpoint here, complete with fake soldiers (and lots of tourists taking pictures). The nearby museum was created in 1963 by Rainer Hildebrandt. It has a lot of pictures, information, and video about people’s attempts to flee the East. A word of caution, though: the museum is really tiny, making it hard to maneuver around due to the big crowds. Avoid going mid-day and on the weekend. 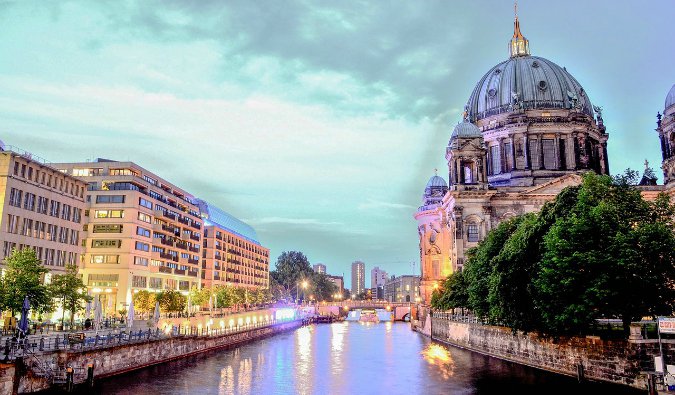 The Spree River flows through Berlin, and there are lots of canals and waterways on which you can take a boat tour. It’s quite relaxing on a warm day.

Hang out on “the beach”
A great summertime activity involves hanging out on “the beach.” Various areas of the riverbank (especially across from the main train station) have “beach bars” where people lounge in beach chairs, drink beer, and soak up the sun. 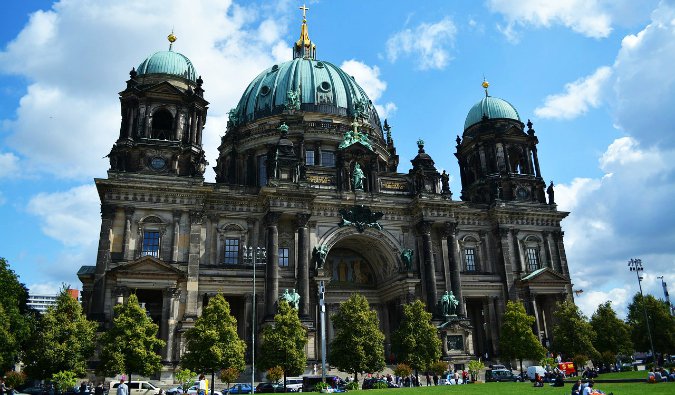 The biggest and most impressive cathedral in Berlin, The Dom was built at the turn of the 20th century as an expression of imperial power. It’s located next to the museum island in Mitte and you can climb to the top of the dome for a beautiful view over Berlin’s center.

Topography of Terror
This open-air museum documents the terror and horror of the Nazi regime. The SS and the Reich Security Main Office were located on this spot. It also consists of excavated prison cells that were located under a remaining stretch of the Berlin Wall.

***
In the end, I’m glad I came back to Berlin. I didn’t see what the fuss was about the first time, but after this visit, I enjoy Berlin more. It’s still ugly, but the art, the music, and the food make it an energetic and happening place to be. Though I may not ever live here, I’d happily go back and visit — over and over again.

Book Your Trip to Berlin: Logistical Tips and Tricks

Book Your Flight
Find a cheap flight to Berlin by using Skyscanner or Momondo. They are my two favorite search engines. Start with Momondo.

Book Your Accommodation
My favorite places to stay in Berlin are St. Christopher’s Inn, Generator, and Wombat’s. To stay at another hostel in Berlin, book with Hostelworld. If you want to stay elsewhere, use Booking.com as they consistently return the cheapest rates. (Here’s the proof.)

Don’t Forget Travel Insurance
Travel insurance will protect you against illness, injury, theft, and cancellations. I never ever go on a trip without it. I’ve been using World Nomads for ten years. You should too.

Need Some Gear?
Check out our resource page for the best companies to use!

Want More Information on Berlin?
Be sure to visit our robust destination guide on Berlin for even more planning tips!

The post How to Conquer the City of Berlin: A Visitor’s Guide appeared first on Nomadic Matt’s Travel Site.