Vail Resorts’ industry-shaking agreement in late July to acquire the 17-mountain portfolio of Missouri-based Peak Resorts is being viewed by analysts as an effort to elevate the company’s position in the Northeast ski market while simultaneously strengthening the value of its Epic Pass.

The acquisition likely was also spurred by Alterra Mountain Co. and its Ikon Pass, which became a clear alternative to the Epic immediately upon its launch ahead of last year’s ski season.

“It may well have been a preemptive purchase by Vail, preemptive of Alterra getting that strong footprint in the Northeast,” said Tom Foley, senior vice president of business and analytics at Inntopia, whose DesiMetrics platform collects and analyzes lodging performance metrics in the destination ski industry.

Vail, already the largest ski operator in the U.S., expects the acquisition to close in the fall for approximately $264 million.

The Peak Resorts holdings consist of primarily small and midsize ski areas located within 100 miles of major cities in the Northeast and Midwest, including New York, Boston, Philadelphia and Cleveland. The largest is Vermont’s Mount Snow.

The Peak holdings include five ski areas in Pennsylvania, four in Ohio, three in New Hampshire, two in Missouri, Paoli Peaks in Indiana and Hunter Mountain in New York. 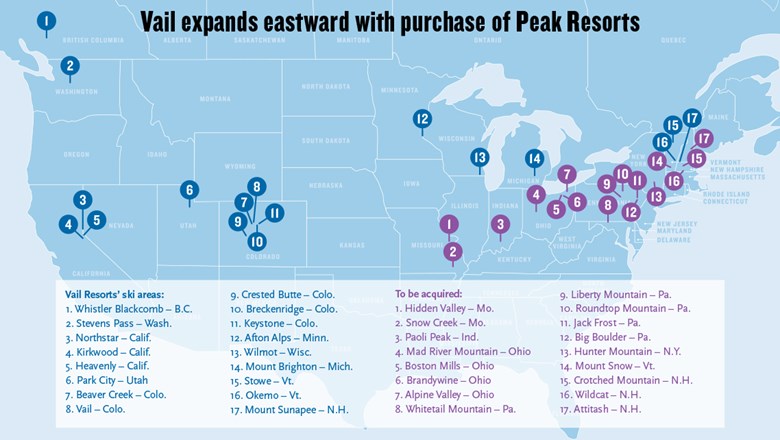 In an email, Vail director of communications Johnna Muscente said that acquiring Peak Resorts will further the Epic for Everyone initiative that Vail announced early this year, which involves a commitment to making skiing more accessible.

“One way we do this is by providing guests access to ski both close to home and at world-class mountains around the world, all with one pass,” Muscente wrote. “With the success we’ve already seen with our acquisitions in the Northeast and Midwest, we felt this was a perfect time to continue to add to our presence in those regions as well as to expand into the Mid-Atlantic.”

Vail entered into the feeder ski area market in 2012 with the purchases of Mount Brighton near Detroit and Afton Alps near Minneapolis. Then in 2016 it added Wilmot Mountain in Wisconsin, 65 miles north of Chicago.

After the Peak announcement, stock analyst Tyler Batory of Janney endorsed Vail’s approach in a note to investors.

“We think [Vail] can use these properties as feeder resorts for its West Coast destination properties,” Batory wrote. Vail, he said, should also benefit from additional guest data for marketing purposes. “Last, we think this furthers its competitive position in the Northeast given it’s arguably a more compelling and comprehensive offering than what is included on the Ikon Pass.”

The Ikon Pass currently includes access to seven East Coast resorts, including Alterra-owned Stratton in Vermont and Snowshoe in West Virginia, along with Alterra partner mountains Killington and Sugarbush in Vermont, Sunday River and Sugarloaf in Maine and Loon Mountain in New Hampshire. Sunday River, Sugarloaf and Loon are owned by Michigan-based Boyne Resorts.

Prior to the Peak Resorts deal, the Epic Pass could be used at only three East Coast ski areas — Okemo and Stowe in Vermont and Mount Sunapee in New Hampshire — which Vail purchased in 2017 and 2018.

Bill Jensen, CEO of Epic Pass partner Telluride Resort in Colorado, said the Peak purchase will especially bolster the Epic in the New York and Washington markets. In Washington, he said, Vail will get a boost from the purchase of nearby Pennsylvania ski areas, which include Liberty Mountain and Whitetail Mountain. Vail’s acquisitions of Attitash and Wildcat in New Hampshire should improve Epic’s presence in the Boston quarter, Jensen added, serving as a counter to Alterra’s relationship with Boyne.

Still, the acquisition deal has raised hackles among some Northeast skiers who worry about the potential homogenizing impact of so many mountains being bought up by an industry behemoth.

“Maybe you all should spend more time skiing in Maine,” wrote one member of the Facebook user group for the clothing company Ski the East. “Still no Vail resorts here, as far as I can tell.”

But both Jensen and Natalie Ooi, program director of the ski area management program at Colorado State University, said that consumers will win from the deal. Notably, Vail has said it will inject $15 million over the next two years into capital improvements at the Peak Resorts ski areas, and the company is selling its annual Epic Local Pass, which will offer unlimited access to all of Vail’s East Coast mountains except Stowe as well as a combination of limited and unlimited access to Stowe and 13 Western ski areas, for $699.

“What Vail is offering in terms of their Epic Local Pass for an East Coast skier would cover you for pretty much everything you need,” Ooi said. “I think there is a lot of the fear of things getting more expensive, but I don’t think it is really founded.”

Bringing more Eastern skiers onto the Epic Pass will boost revenue for Vail at its large Western destination resorts, Ooi predicted. Epic Pass holders will choose Vail mountains for their annual trips due to the prepaid lift passes but then spend money at hotels, restaurants, retail shops and rental shops that Vail owns in those locations.

Indeed, Foley said that Vail’s purchase of Peak Resorts should be viewed as the latest escalation in the pass battle that began with Alterra’s release of the Ikon Pass last year.

“I’d fully expect Alterra to counter at some point with additional purchases of their own,” he said.

Jensen agreed, adding that Vail’s Peak Resorts purchase could signal a shift in buying patterns within the industry.

“I think the industry was watching Vail and Alterra snatch up the well-known resorts,” Jensen said. “Now, with this purchase of 17 smaller resorts, is it going to start up a new era of acquisition of smaller ski areas near urban population centers?”