PERTH may not be as chaotic as other capital cities around the world but it still has its fair share of traffic, busy business people, and skyscrapers. 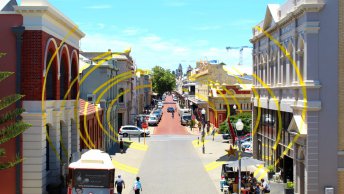 They offer welcome moments of tranquility and a place to delve into a book without the constant interruptions often found in modern day life. Best of all, many of them are easily accessible from Perth city center.

A one-hour drive southeast from Perth city center is a place where Mother Nature had some of her most brilliant ideas.

The national park is most well-known for its natural waterfall that rushes down the face of a pure granite cliff and into the swimming lake below, but there is a lot more to this 10,840-acre area.

The park boasts meadows of wildflowers next to giant native trees, such as the Australian eucalyptus and the much rarer Darling Range Ghost Gum tree which are protected in the park.

Of course, there are also snakes, spiders, mosquitoes and some rather fearless horseflies in the park. So grab your repellent and watch your step.

The initial grassy area as you drive into Serpentine National Park is a great place for a picnic and offers shade. So, if you are not fond of the sun, make this your reading spot.

Alternatively, and best if you are with a group that wants to do more than getting stuck into a book, head over the bridge and up the path to Serpentine Falls.

Here, you can sit on the granite rocks listening to the gush of the waterfall and get lost in your book.

Recognized as one of the world’s biggest inner-city parks and renowned for its horticulture, conservation, community events, design, and public education, Kings Park never fails to amaze visitors.

At the very top of the slopped park is an Anzac memorial complete with an eternally burning flame and whispering wall. This area also offers magnificent views over Perth’s skyline and views onto both Swan and Canning rivers.

The information center along Fraser Avenue is open every day and offers free guided tours of the park to explain the conservation efforts and introduce visitors to the native flora and fauna growing here.

There is also a list of family-friendly events throughout the year and even opportunities to host your wedding in the park.

Kings Park is easily accessible by car or bus and can be walked to from the city.

The picturesque cove resembles a cute seaside village on the coast of France with its varying architectural styles and sublime tranquillity.

The bus drops you off Victoria Gardens which boasts views back into the city, over the estuary and across to the newly built Optus Stadium.

A stroll down one of the many pathways towards the estuary will lead you to waterside benches and plenty of alfresco dining options.

Down here it is easy to forget you’re only 10 minutes from the bustling city center.

Western Australia has some the best beaches in the world, with the clearest waters and incredible marine life.

Many of them are mere miles from Perth city center, including Palm Beach in Rockingham.

Palm Beach has a reputation of being very clean and offers something for everyone, from reading on the sand to fishing off the jetty, or seal spotting from a kayak to sipping coffee in nearby Spill the Beans café.

Dolphins are often sighted off the coast too, as is the occasional shark, so do be careful if you are venturing into the water.

Perhaps the most tranquil place in the whole of Western Australia is Rottnest Island. It is easily accessible from the E Shed Markets in Fremantle via ferry link and a must-do if you’re vacationing in the area.

Rottnest Island was once a prison island for the aboriginal people of Australia, but it’s now a vacation destination packed with adorable quakkas and lined with breathtaking beaches.

However, the best spot for reading on the island has to be Cape Vlamingh at the western tip of the island.

It is also Australia’s most westerly point as the next solid landmass is Madagascar, 6,436 kilometers away.

The rugged coastline and visible riptides give this part of the island a more adventurous atmosphere compared to the sheltered beaches across the rest of the island.

The wind whips up a strong breeze at Cape Vlamingh so be sure to bring a cozy jumper with you.